17 Best Movies Filmed in Ireland you need to Watch 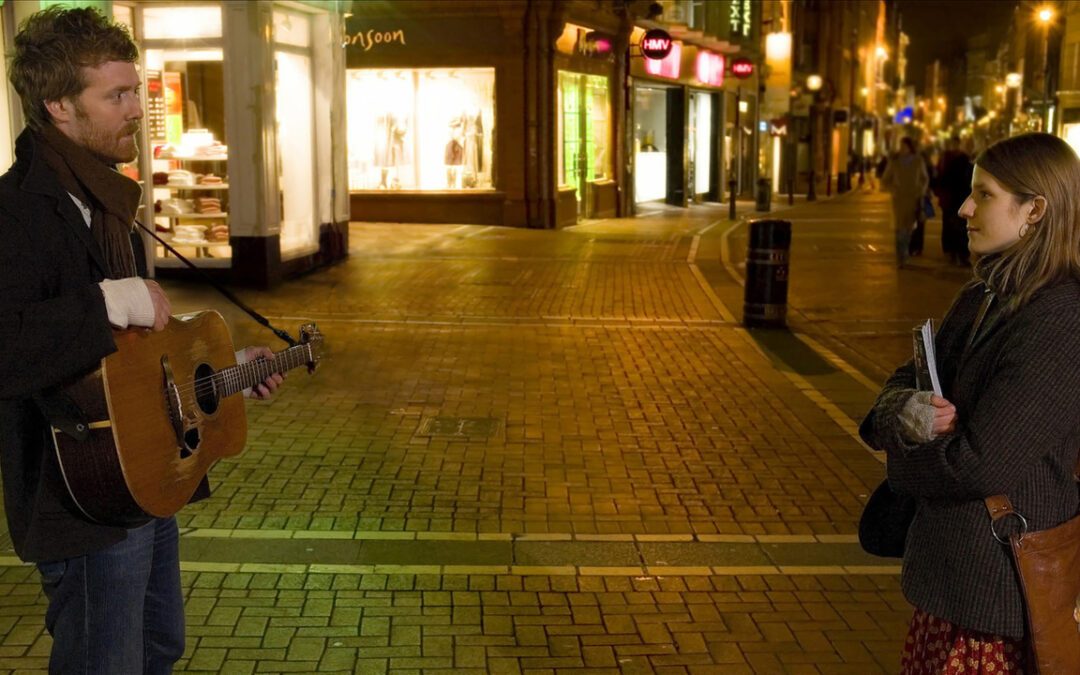 Due to its geography and breathtaking landscapes, Ireland is often a point of reference when it comes to filming movies: Saving Private Ryan, Star Wars: The Force Awakens and Braveheart are just some of the great productions that have been filmed on Irish soil.

Get to know Ireland on the Screen

We present here a list of films that make this European country a place of dreams – get to know the Emerald Isle on the big screen!

The film, which is about the famous Scottish hero, William Wallace, had its battle scenes in Ireland. The most memorable site was Trim Castle (County Meath), where the battle for independence was depicted. Members of the Irish Army Reserve were used as extras in the battle. More curiosities? Mel Gibson initially turned down the role of William Wallace as he felt he was too old for the part. Eventually Paramount Pictures convinced him.
The movie won several awards, including Best picture, best director, best cinematography, best sound effects and best make up.

For Star Wars Episode VII: The Force Awakens, scenes were shot on Skellig Michael, some 11.6 km off the west coast of Ireland in County Kerry in September 2014. On this steep rocky island, also known as Great Skellig, fans of the saga often gather with their laser swords and costumes to celebrate the “May The Fourth Be With You” festival in May. On the other hand, Star Wars: The Last Jedi (2017) was filmed in Skellig Michael in September 2015. In May 2016, other scenes for the film were shot at Malin Head in County Donegal, Loop Head (County Clare), Brow Head (County Cork), and Sybil Head and Dunmore Head on the Dingle Peninsula in County Kerry.

This moving dramatic film directed by Richard LaGravenese and starring Hilary Swank, Gerard Butler, and Lisa Kudrow, is based on the 2004 novel of the same name by Irish writer Cecelia Ahern. The majestic landscapes seen on screen are from Blessington and Sally Gap in County Wicklow as well as Dublin. The soundtrack features The Pogues (English-Irish punk rock band), Laura Izibor (R&B, soul and pop vocalist from Dublin) and Irish-Americans Flogging Molly, a Celtic punk band formed in Los Angeles in 1997.

Shot in Dublin over 17 days, for a mere 120.000€ , Once was an art-house musical, a “visual album”, with two relatively unknown leads: Glen Hansard (of the band The Frames) and the Czech Markéta Irglová. Both had little acting experience. But, surprisingly, this romantic story directed by John Carney, which mixes love, drama and music, was a success.
This little Gem stands out not only for its love story and soundtrack, for which they won an Oscar Academy Award for Best Original Song for ‘Falling Slowly but also for its outdoor Dublin settings: Temple Bar, Grafton Street, St. Stephen’s Green and Killiney Hill.
It is a must to see Dublin on screen.

Directed by Alan Parker, this musical comedy-drama film recreates the story of a charismatic soul band from Dublin called The Commitments.
Voted “Best Irish film of all time” in a 2005 poll sponsored by Jameson Irish Whiskey, the movie was filmed on locations all across Dublin City: Saint Francis Xavier Church, Kilbarrack D.A.R.T. Station, the Darndale area on the Northside of Dublin, upstairs at the Camden Deluxe Hotel (the band’s rehearsal space), and Mansion House on Dawson Street.
In the film, the house becomes the fictional Westley Hotel – a cheeky hat-tip to Assistant Director Bill Westley – where the band’s manager, Jimmy, hopes to meet soul legend, Wilson Pickett. Today the building houses a swanky restaurant where you can book private dining rooms – if you have the money. 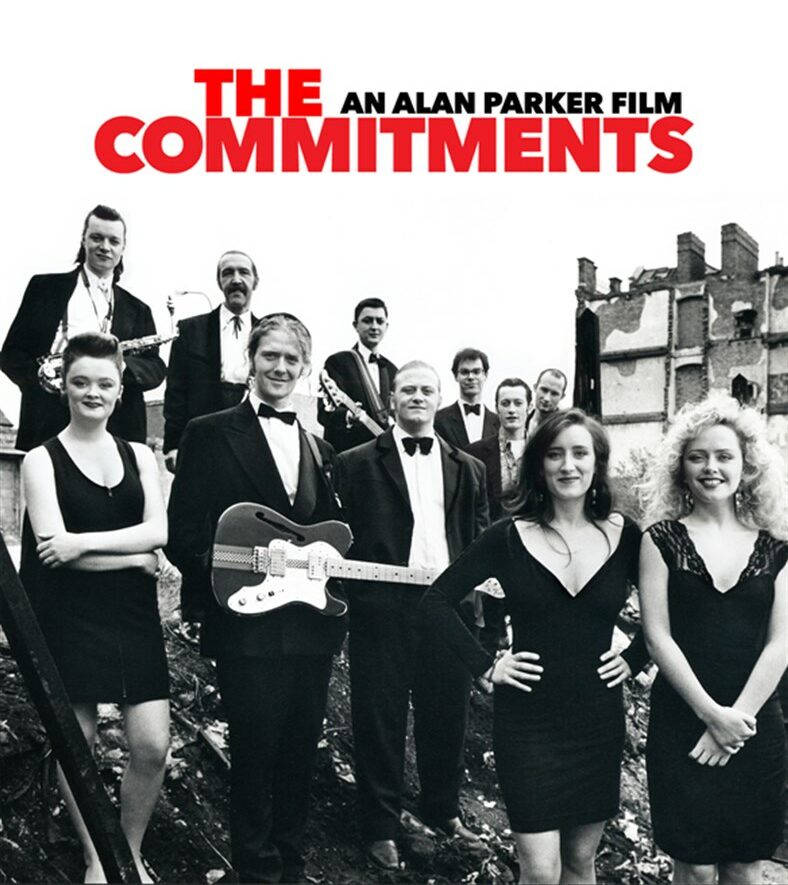 The Commitments, an Alan Parker Film

Steven Spielberg’s multi-award-winning film (it received 11 nominations and won 5 Oscars), starring Tom Hanks, Edward Burns and Matt Damon, focuses on D-Day, the Allied landing in Normandy on 6 June 1944. The scenes in the first 20 minutes of the film, which recreate one of the most dramatic moments of the last century, were shot on the beaches of Curracloe and Ballinesker in County Wexford. In this film, the Irish reserve defence forces were again called upon to provide 1,500 extras for the battle. The fact: the whole thing took place over two whole months in 1997 and cost over €46 million to produce.

8. Harry Potter and the Half-Blood Prince (2009). Counties Clare and Kerry.

Cliffs of Moher´s magic comes to the fore in a key scene in the sixth instalment of the Harry Potter franchise. Harry and Dumblemore battle evil and face a looming metaphorical obstacle. All this with the waves roaring in the background and the wonderful cliffs of County Clare. After that famous shot, both protagonists lie standing on a rock, but be warned: that rock is called Lemon Rock and is located in County Kerry. Appearances can be deceiving!

This romantic drama directed by John Crowley and written by Nick Hornby, based on the 2009 novel of the same name by Colm Tóibín, is a co-production between the UK, Ireland and Canada. Although set primarily in the United States, Brooklyn was also filmed in Enniscorthy, County Wexford. The film takes us back to 1950s Ireland and earned an Oscar nomination for its leading lady, actress Saoirse Ronan. Also featured in the film are St. Aidan’s Cathedral, 22nd Street in Enniscorthy and the beaches of Curracloe and Ballinesker. 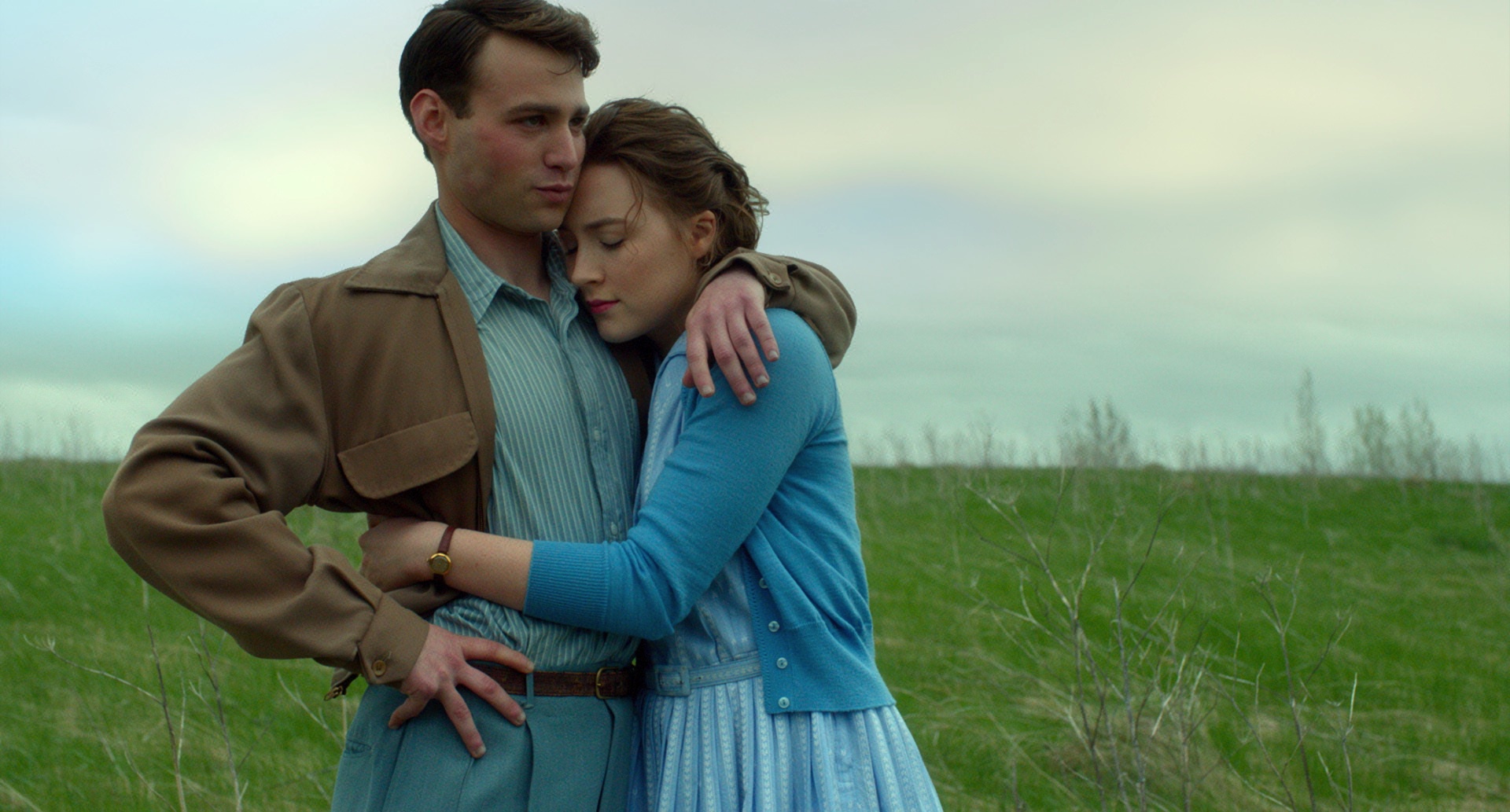 This film, directed by Nick Hamm and based on the book “Killing Bono: I Was Bono’s Doppelganger” by journalist Neil McCormick, recreates the story of young Neil and his younger brother Ivan, who try to become rock stars. But then their high school friends form U2 and establish themselves as the world’s biggest band. Belfast’s Café Vaudeville, the Merchant Hotel, the Chimney Corner Hotel (County Antrim) and Donaghadee Harbour (County Down) are just some of the locations where scenes from this film were shot.

John Carney, the director of Once, once again pays musical homage to his hometown in this story about teenagers – played by actors and actresses Lucy Boynton, Maria Doyle Kennedy, Jack Reynor, Kelly Thornton and Ferdia Walsh-Peelo – who form a band in the 1980s. The film received positive reviews, grossed $13 million worldwide and was nominated for Best Motion Picture Musical or Comedy at the 74th Golden Globes. This moving film showcases the beauty of Dublin’s urban parks and avenues. It also features the beautiful seaside towns of Dalkey and Dun Laoghaire.

Released only a few months ago, the film tells how Finley, a talented aspiring violinist, meets Beckett, a young film star, when she is in Ireland on her university semester abroad. An unexpected romance develops between them. Directed by Brian Baugh, this romantic comedy starring Rose Reid, Jedidiah Goodacre and Katherine McNamara was filmed in different counties: Dublin, Claire, Offaly and Kildare. It was also filmed in the beautiful village of Carlingford, located on the west coast of the country, in County Louth.

War drama directed by Ken Loach, set during the Irish War of Independence (1919-1921) and the Irish Civil War (1922-1923). Written by Paul Laverty, the film tells the fictional story of two brothers from County Cork, Damien O’Donovan (Cillian Murphy – yes, the guy from Peaky Blinders!) and Teddy O’Donovan (Pádraic Delaney), who join the Irish Republican Army to fight for Irish independence from the United Kingdom. The film was shot in several towns in County Cork, including Ballyvourney and Timoleague. Part of the filming took place in Bandon. A scene was shot along North Main Street and outside a building next to the courthouse.
This movie won several international Awards, 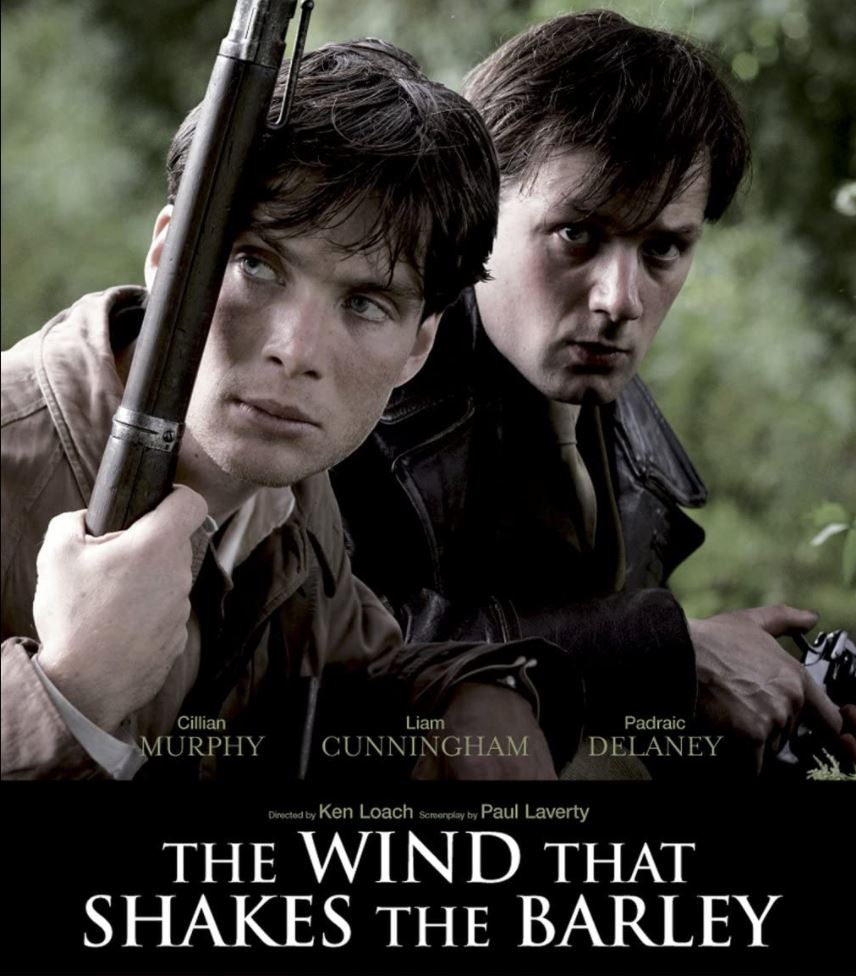 The Wind that Shakes the Barley – Ken Loach

Written and directed by Neil Jordan and starring Liam Neeson as Irish revolutionary, soldier and politician Michael Collins, this film was shot entirely in Ireland, with the exception of some reshoots in New York. The prison scenes were shot in Kilmainham Gaol, County Dublin. Sites such as Dublin City Hall, Trinity College, the Four Courts and Dublin Castle were also chosen. Broadstone Hall, near Phibsboro, was transformed into the General Post Office for the iconic Battle of O’Connell Street. In addition, the Carlisle Grounds stadium in Bray, County Wicklow, was used for the Croke Park scenes in Bloody Sunday.

Do you remember this romantic comedy starring Amy Adams and Matthew Goode? The story focuses on Anna Brady, who plans to travel to Dublin to propose to her boyfriend Jeremy on Leap Day, 29 February. According to Irish tradition, a man who receives a marriage proposal on Leap Day must accept it. This film was shot in different locations and counties. Throughout the film there are scenes from the Aran Islands, Connemara, Temple Bar, St Stephen’s Green, Wicklow National Park, Waterford’s Olaf Street and its surroundings, the Carton House Hotel in Maynooth (County Kildare) and more.

In this 1992 film, Tom Cruise and Nicole Kidman play Irish immigrants seeking fortune in 1890s America who end up participating in the 1893 Land Run (an event in which America’s previously restricted land was opened to farming for the first time). This epic Western romantic adventure film was directed by Ron Howard. Filming began in Montana (USA) and then moved to Ireland. For the Irish coastal scenes, the Dingle Peninsula (County Kerry) was used, where a village was built especially for the film. The estate where Joseph Donnelly (Cruise) falls in love with the landowner’s daughter is Killruddery House, near Bray, south of Dublin.

This movie is Based on the best-selling autobiography by Irish expatriate Frank McCourt.  Directed by Alan Parker and starring Emily Watson, Robert Carlyle, Joe Breen, Johnny Murphy, Gerard McSorley and Martin Benson, Angela’s Ashes chronicles the experiences of young Frank McCourt and his family as they attempt, against all odds, to escape the poverty endemic to the slums of pre-war Limerick. Notably, the interior scenes of the church were shot in a Dublin studio. Due to their controversial content, the production was refused permission to film in any church in Limerick.

Did you know that Oscar winner Matt Damon was filming on the Emerald Isle and that in the early months of the lockdown he had to stay in Dublin? As we were saying, The Bourne Identity and Good Will Hunting star was filming scenes in County Tipperary for The Last Duel, Ridley Scott’s new film production. Also included are shots at Cahir Castle and Inch Field.

Meanwhile, the romantic comedy Wild Mountain Thyme, released a few months ago and starring Emily Blunt, Jamie Dornan, Jon Hamm, Dearbhla Molloy and Christopher Walken, was filmed in County Mayo. Locations include Hiney’s pub and The Thatch Inn in Crossmolina and Mount Falcon Estate in Ballina. The film also features Nephin Mountain and some of the spectacular scenery of the Wild Atlantic Way.

Disenchanted, a live-action American romantic comedy musical fantasy film, produced by Walt Disney Pictures and written and directed by Adam Shankman as a sequel to the 2007 film Enchanted, was filmed during the month of June in Enniskerry, a Wicklow village transformed into a fairytale. Scenes for the feature-length musical have taken place in various locations, including Dundalk, Dublin city centre and Greystones.