Best Greenways and Trails of Ireland 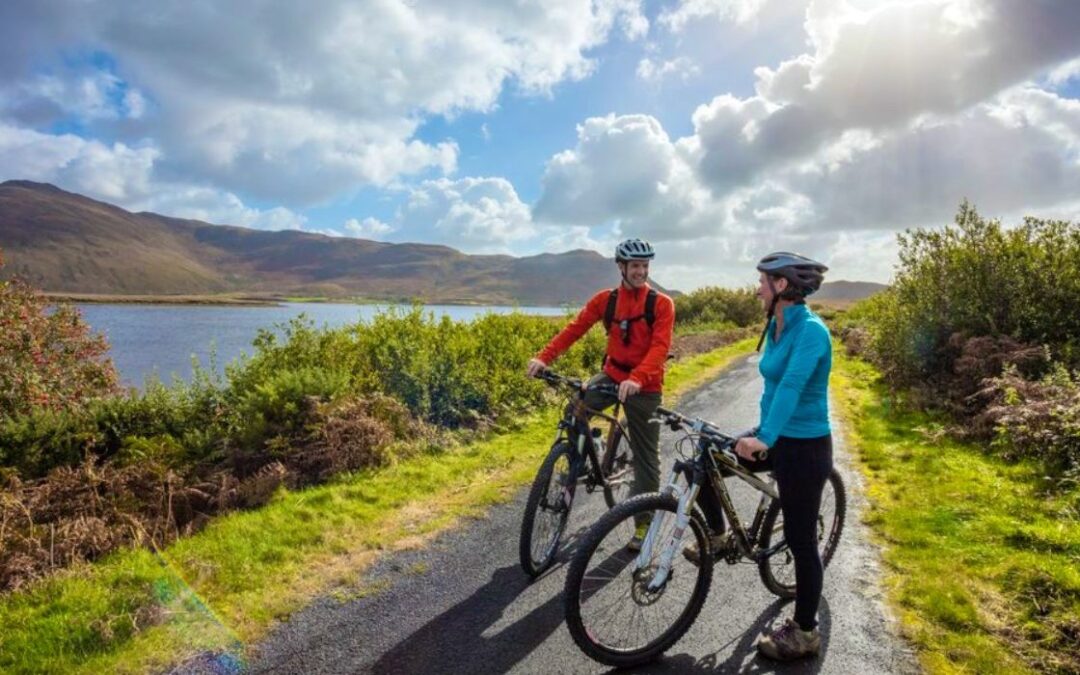 Ireland´s Greenways are off the beaten track routes for walkers, cyclists, and other non-motorized transport in Ireland.
These routes are often created from abandoned Irish rail networks.

Here we have picked some of Ireland’s best and most popular Greenways and trails for you to explore within all of Ireland.
Whatever your fitness level, you’re sure to find a route to suit you and your family or group.

Walking and Cycling around Ireland´s Greenways and trials.

The Waterford Greenway is the longest, dedicated off-road walking and cycling trail in Ireland. 46 km in length, you can cycle or walk the route which runs from Waterford City to Dungarvan and follows the old Waterford to Mallow railway line.

We recommend hiring a bicycle and starting your cycle from Dungarvan. This route affords beautiful views of Dungarvan Bay and King John’s Castle and the Waterford coast, before passing over the famous Ballyvoyle Viaduct.

After the viaduct, whether you are cycling or walking, you can look forward to traveling through the Durrow Tunnel – one of the most iconic features of the Greenway. Cycling through the dark stone tunnel allows tourists to relive what it was like traveling by train all those years ago. In terms of difficulty, the trail is suitable for people of all fitness levels and is a great way to spend a family day out.

The Great Western Greenway, in County Mayo, is a 42km trail that follows the route of the now defunct Achill to Westport railway line and offers breath-taking views of Clew Bay and its surrounding landscape. First opened in 2010, the route is popular with tourists. Thousands of visitors, both international and domestic, travel west to walk or cycle the trail.

Book a Greenway with us Today

The gateway to West Limerick, the Limerick Greenway, is a 40km off-road cycling and walking trail which gives you the opportunity to explore quaint towns and villages including Rathkeale, Ardagh, Newcastle West, Templeglantine, and Abbeyfeale. Starting in Rathkeale, cyclists or walkers travel westward through the town towards Ardagh.

On route, you’ll cross over five beautiful cut-stone bridges and enjoy pleasant views of the surrounding farmland. Once past Ardagh, cyclists or walkers will be on route to Newcastle West, where the most challenging part of the route occurs.

Between Newcastle West and Barnagh, visitors will face the Greenway’s steepest incline, however, the climb is worth it as this section of the route boasts incredible views of the Limerick plains and the Golden Vale. From Barnagh, the route is mostly downhill and passes through bridges, embankments, and peaceful woodland.

Once you reach Abbeyfeale, you’ll be able to rest and enjoy a well-deserved break and refreshments.

The Grand Canal Way is a 117 km long-distance trail that follows the towpath of the canal from Lucan Bridge to Shannon Harbour. The mammoth trail is typically completed in five days or can be cycled or walked in sections.

A really enjoyable section of the Grand Canal Way is 8.5km long and is found between the third lock at Inchicore and the twelfth lock at Lucan. This stretch of the route opened in 2010 and is a great way to explore the capital, whether you’re just visiting or a True Blue.

Ireland´s Greenways and trails are a great way to see some of the most beautiful and Hidden Gems of Ireland, while enjoying the great outdoors

Totaling 144 km in length and running almost parallel to the Grand Canal Way, the Royal Canal Way passes through Dublin, Kildare, Meath, Westmeath before reaching its final destination in Longford. The full trail typically takes four to five days to complete but can be split into smaller sections if cyclists or walkers don’t want to tackle the full route.

Apart from miles of glorious unspoiled countryside and spectacular scenery, what exactly does the Royal Canal Way has to offer? Cyclists or walkers can enjoy visiting lots of cultural and historical sites with plenty of examples of late-eighteenth-century industrial archaeology to admire along the way, including the Ryewater Aquaduct which brings the canal over the Rye River.

The Boyne Greenway is the ideal way to explore Ireland’s Ancient East. Running from Dominic’s Park on the south bank of the River Boyne near the Bridge of Peace in Drogheda, the Boyne Greenway leads you west of Drogheda towards the Mary McAleese Cable Bridge. From there you’ll follow the route along the Boyne Canal to the Battle of the Boyne Visitor Centre at Oldbridge.

This famous site is where William of Orange defeated King James ll of England’s forces to regain the British crown and become king. After his loss, James fled to France and never returned to the British Isles again. The site’s historical significance has made it one of the best-known battlefields in British history and a key part of Orange Order folklore. 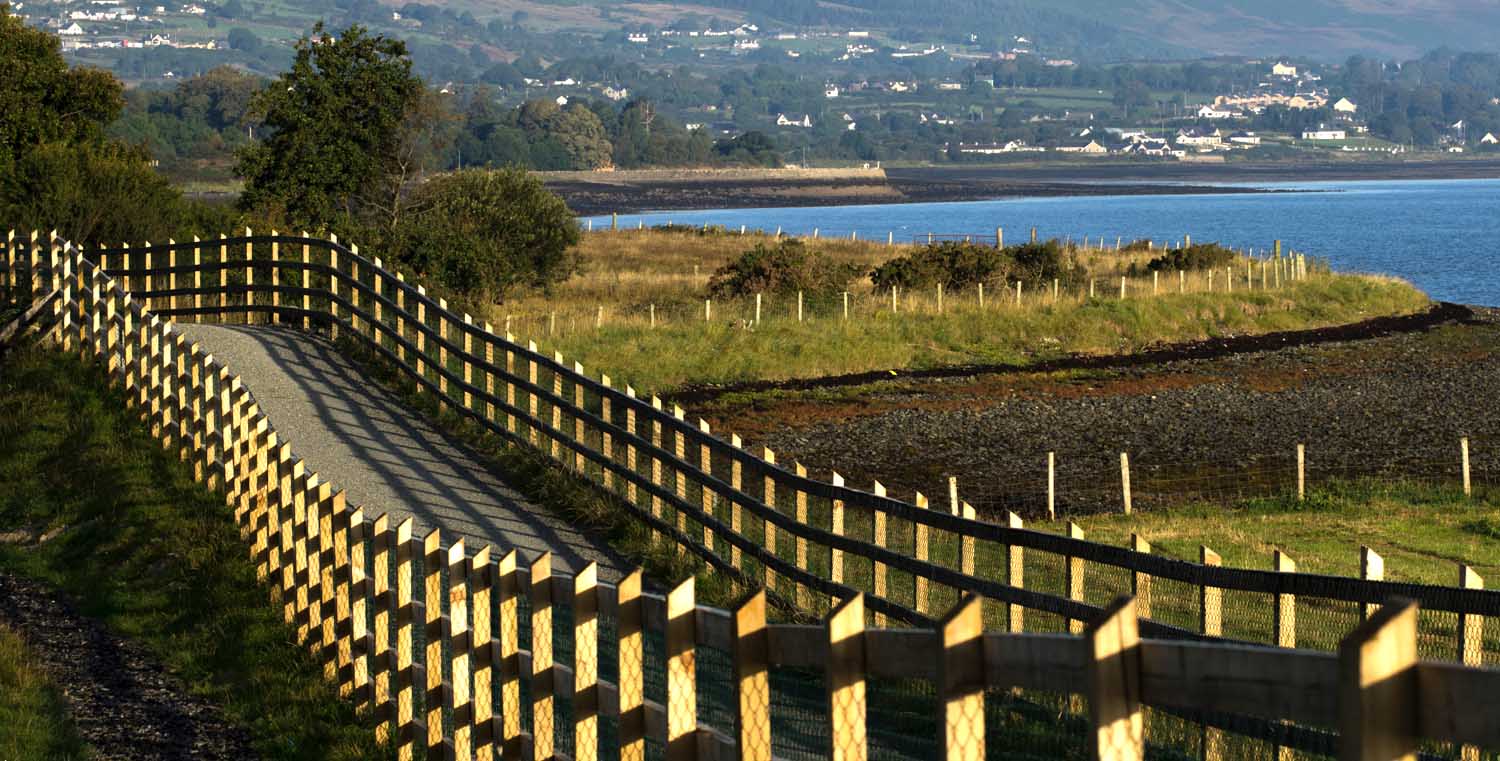 The Great Eastern Greenway is a short 7km trail that runs from Carlingford Lough to Omeath.
This route can be easily walked or cycled and It’s ideal for novice cyclists. The Greenway provides great views across the lough to the Mountains of Mourne, while Slieve Foy towers over it on the Louth side.
The Greenway runs through fields full of grazing sheep, over old level crossings, and even a few bridges. There are trees, wildflowers, and birds to be seen along most of the way too.

The Old Rail Trail is another one not to miss. It is a rural route through the heart of the Irish midlands connecting the bustling town of Athlone with the market town of Mullingar passing through the town of Moate. The route is 40km, along a converted stretch of the former Midlands Great Western Railway and passes through rich fertile farmland away from the hustle of towns.
Start in Mullingar and follow the path along the canal to the head of the Greenway.  Don’t forget to visit Dún na Sí Amenity & Heritage Park along the way, just 10 minutes from Athlone in Moate, a wonderful getaway that’s full of natural beauty.