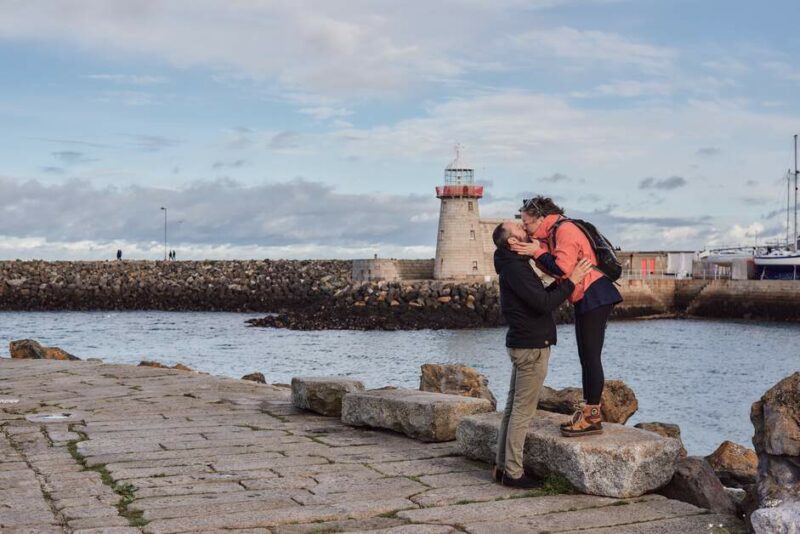 Saint Valentine’s Day is celebrated all over the world as the day of love, but Ireland has some of the most romantic traditions to celebrate on February 14th.
Did you know the relics of Saint Valentine, one of the world’s most revered Saints, reside in the Whitefriar Street Church, a beautiful church located in the heart of Dublin City?

Celebrate the love in Ireland

People come from all over Ireland and the world to visit Saint Valentine and pray in the hope that he will grant them love and happiness.
Keep reading and get inspiration if you want to surprise your partner with a Romantic trip to Dublin and other places in Ireland on Saint Valentine’s Day.

1. Who was Saint Valentine?

Saint Valentine was born in Terni, Italy and famously preached and ministered to the Christians of Rome at a time when Christians were brutally persecuted within the Roman Empire. 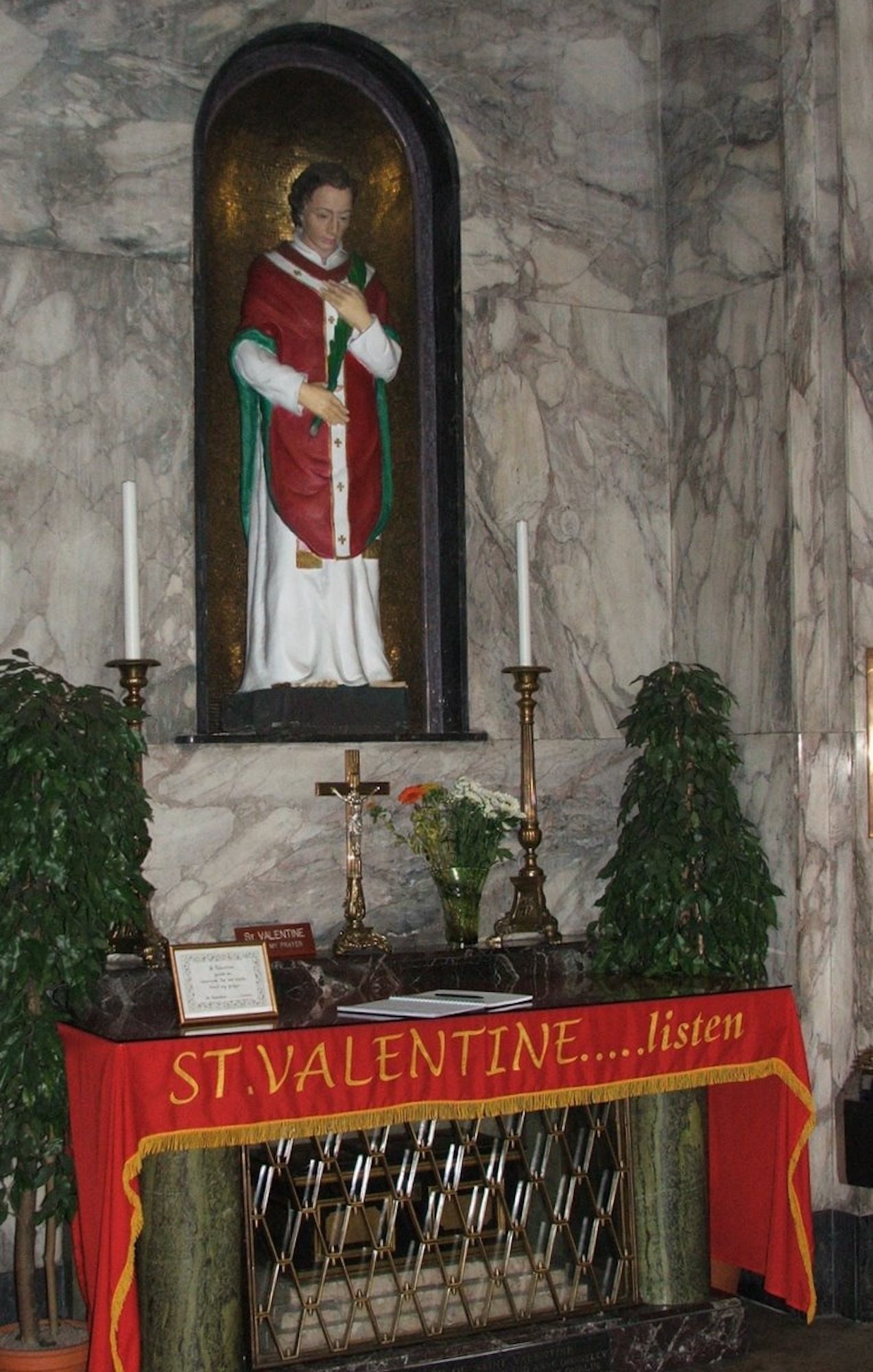 He performed baptisms as well as marriage ceremonies within the city walls of Rome, a practice that would ultimately cost him his life.

Legend says that he tried to convert the lifelong Pagan Emperor Claudius II to the faith of Christianity. Claudius was outraged and condemned Valentine to a brutal death,On February 14th 260AD Saint Valentine was brought to the Flaminian Gate in Rome, now Piazza del Puopolo. Here he was beaten and beheaded.

According to one legend, an imprisoned Valentine sent the first “valentine” greeting himself after he fell in love with a young girl—presumably his jailor’s daughter—who was blind and visited him during his confinement. Before his death, it is said that he wrote her a letter signed “From your Valentine,” and she miraculously gained sight so that she could read the note herself. It is from this that the tradition of giving cards on Valentine’s Day emerged.

Although the truth behind this Valentine legend is not really verified, the stories all emphasize his appeal as a sympathetic, heroic and—most importantly—romantic figure.
St Valentine is the patron Saint of love, a happy marriage, beekeepers, plague, and epilepsy and is also associated with curing blindness.

2. Where can you find the remains of Saint Valentine in Dublin

You can visit the resting place of Saint Valentine just a short walk from the bustling Temple Bar area of Dublin.
The Church of Our Lady of Mount Carmel & Shrine of Saint Valentine, simply known by locals as Whitefriar Street Church, is located on 56 Aungier Street, Dublin.
The moment you step into this beautiful and peaceful Church, you are surrounded by magnificent stained glass and a sense of belonging, allowing moments of reflection in a vibrant and busy inner-city Dublin.

On February the 14th, Saint Valentine’s Day, usually there is a beautiful ceremony that blesses the rings of couples who are about to be married.
For anyone visiting Dublin, this is a must-see location, especially on Saint Valentine’s Day, and is a once-in-a-lifetime opportunity to visit the resting place of one of the world’s more revered and famous Saints for love.

3. How Saint Valentine Came to Dublin

In 1835, Irish Carmelite priest, Father John Spratt was invited to deliver sermons in Rome.  Upon visiting Rome he entranced those who heard him preach. Father Spratt was also famous for his dedication to the poor of Dublin; his good works were well known especially in the Liberties area of Inner City Dublin.

The relics of St Valentine have been in a shrine in the Whitefriar Street Church since 1836, when Father John Spratt was gifted them by Pope Gregory XVI.
Since November 10, 1836, the people of Dublin have been visiting the shrine of St Valentine in Whitefriar St Church, where they’ll find a simple, softcover notebook for people to write their messages to St Valentine.

4. Other Romantic Traditions in Ireland

Ireland has several Romantic Traditions and Legends that are still part of the culture of Irish living anywhere in the world.

This story, harking back to the tenth century has some variations in the stories recorded but is about Gráinne, daughter of the High King of Ireland, who was engaged to the elderly widower Fionn MacCumhaill.
Gráinne instead falls in love with one of Fionn’s warriors named Diarmuid, and the couple elopes, going on to have five sons.
Fionn pursues them until Diarmuid meets a tragic end in which Fionn could have saved him but chooses not to. Today, the landscapes they traveled still bear testament to this love story: in County Sligo, above the Gleniff Horseshoe looped walk, “Diarmuid and Gráinne’s cave” was said to be the couple’s last hiding place; while across the Burren in County Clare, the megalithic tombs dotting the landscape are called “leaba Dhiarmada agus Gráinne” or bed of the lovers.

The World’s original offline matchmaking festival takes place Every September in the small village of Lisdoonvarna on Wild Atlantic Way..
The Lisdoonvarna Matchmaking Festival attracts around 60,000 visitors looking for love through music and dancing. The festival is more than 160 years old, and with the tagline “Where Music’s Played, and Matches Are Made”.
Ireland’s most famous matchmaker is Willie Daly. His passion is to help hopeful singles, of all ages and nationalities, find a life partner and have a lot of fun on the way. Since he started out as a matchmaker 50 years ago, following in his father’s and grandfather’s footsteps, Willie has set up around 3,000 marriages.
Bars and pubs will headline some of the top names in country music, offering a chance to gather and celebrate life, love, good music, and great times.

The Planter’s Daughter by Austin Clarke

When night stirred at sea
And the fire brought a crowd in,
They say that her beauty
Was music in mouth
And few in the candlelight
Thought her too proud,
For the house of the planter
Is known by the trees.

Men that had seen her
Drank deep and were silent,
The women were speaking
Wherever she went –
As a bell that is rung
Or a wonder told shyly,
And O she was the Sunday
In every week.

Masons, when they start upon a building,
Are careful to test out the scaffolding;
Make sure that planks won’t slip at busy points,
Secure all ladders, tighten bolted joints.

And yet all this comes down when the job’s done
Showing off walls of sure and solid stone.

So if, my dear, there sometimes seems to be
Old bridges breaking between you and me

Never fear. We may let the scaffolds fall
Confident that we have built our wall.