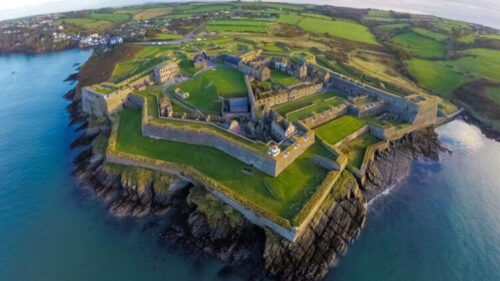 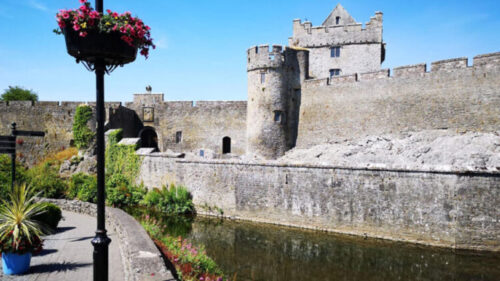 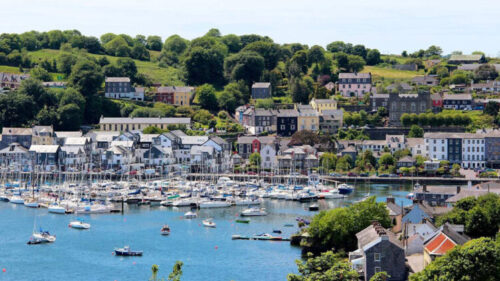 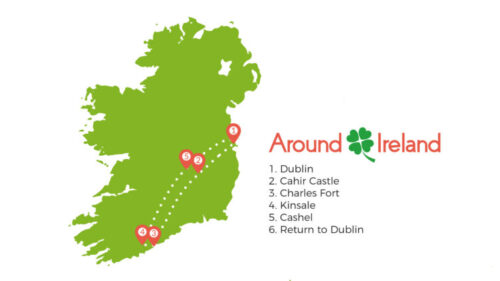 Day tour for groups to Kinsale in Cork

We will leave Dublin towards Cahir Castle, one of the largest and most striking of the Castles of Ireland, with stunning features such as a working portcullis, cannons, and beautiful crenelations is sited on an island in the river Suir. It was built from 1142 by Conor O’Brien, Prince of Thomond.

Cahir Castle is no stranger to the world of cinema having featured in movies such as Barry Lyndon and Excalibur as well as the TV series The Tudors. We will spend an hour on-site.

Charles Fort is one of the finest surviving examples of a 17th Century star-shaped fort. It was constructed between 1677 and 1682 – during the reign of King Charles II – to protect the town and harbour of Kinsale in County Cork. William Robinson, architect of the Royal Hospital in Kilmainham, Dublin, and Superintendent of Fortifications, is credited with designing the fort.

As one of the largest military forts in Ireland, Charles Fort has been associated with some of the most momentous events in Irish history. These include the Williamite War in 1690 and the Irish Civil War of 1922-23. Charles Fort remained garrisoned by the British army until 1922.

The picturesque yachting harbour of Kinsale (Cionn tSáile) is one of the many colourful gems strung along the coastline of County Cork.

Kinsale claims to be one of the most quaint and oldest towns in Ireland. It is also internationally renowned for the number and quality of its restaurants. It has been hailed as “The Gourmet Capital of Ireland”, with no shortage of cafés, pubs and restaurants to suit every taste and budget.

Cashel, meaning “stone”, is a town in County Tipperary. It was once the seat of the Kings of Munster and the collection of medieval buildings perched on this limestone outcrop are truly unique

Free time, 50 mins to visit Cashel with stop for pictures and we can visit these three places depending on the season of the year.

Day tour for groups to Derry / Londonderry
Next tour: //, Thursday
€79

Day tour for groups to Wexford
Next tour: //, Thursday
€79

Day tour for groups to Kildare
Next tour: //, Thursday
€69

Day tour for groups to Kinsale in Cork
Next tour: //, Thursday
€79

Day tour for groups to Wicklow and Powerscourt
Next tour: //, Thursday
€69