Best things to do in Ireland at Halloween 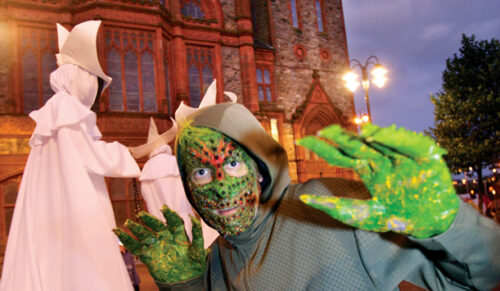 Halloween’s origins date back to the ancient Celtic festival of Samhain
The Celts, who lived 2,000 years ago, mostly in the area that is now Ireland, the United Kingdom and northern France, celebrated their new year on November 1st .

This day marked the end of summer and the harvest and the beginning of the dark, cold winter months. Celts believed that on the night before the new year, the boundary between the worlds of the living and the dead became blurred. On the night of October 31st, they celebrated Samhain, when it was believed that the ghosts of the dead returned to earth.

Some of the best activities and festivals happening in Ireland during Halloween:

The story of Halloween begins in County Meath, Ireland’s early base of spiritual and political power. High Kings ruled from the Hill of Tara and the surrounding landscape is still full of mysterious standing stones and ruins of pre-Christian vintage. Newgrange, an immense 5,000-year-old burial monument, still amazes visitors today. The Spirits of Meath Festival engulfs the county in Halloween hysteria until 2nd November. There are tricks for all: crafty witches, spooks and spells, enchanted landscapes, mad scientists, creepy cuisine, candlelit tours, haunted houses, banshees, storytelling, pumpkin carving and fancy dress. Fun by day and fright by night, the Spirits of Meath Festival makes for an electrifying display of Halloween horrors.

Do you want to celebrate Halloween in Ireland this year? ▶

Banks of the Foyle Halloween Carnival in Derry

When it comes to celebrating Halloween, nowhere does it quite like Derry, is the ultimate Halloween headquarters. It throws the biggest annual bash anywhere, and Northern Ireland’s historic second city provides a fiendishly perfect setting for after dark larks. The Banks of the Foyle Halloween Carnival is set to break all records, spanning 29 October to 2 November. Imagine Halloween with a global dimension, as celebrated by cultures worldwide.
A massive parade will meld local and global traditions in sumptuous performance and pageantry. As always, Derry extends its Halloween welcome to everyone, from this world and the next. The only rules: get in the spirit and don’t come as you are.
The entire population takes to the streets in fancy dress. Here, costume is an art form, the people-watching alone is out of this world.

Westport House will be hosting it’s annual Halloween event in the Basement from 26th and 31st October from 11:00am to 5:00pm.

Get ready for plenty of ghoulish delights, scary stories and creepy fun that all the family will enjoy!

This Wicklow based event is described on its site as Ireland’s “most intense and terrifying Halloween scare house.

Set in an abandoned asylum, its nine terrifying scare attractions will leave you quaking in fear and shaking with adrenaline.
The actors here are second to none and make the stories of the old asylum come to life before your eyes.
Top attractions include The Cell, where the most dangerous and disturbed residents reside, and The Dark House, which we don’t recommend for those with phobias of clowns!

If you are one of those who enjoy the panic and to be threatened, Paranoia is the perfect Halloween experience. It will leave you shook to the core and ready for the scariest holiday of the year.