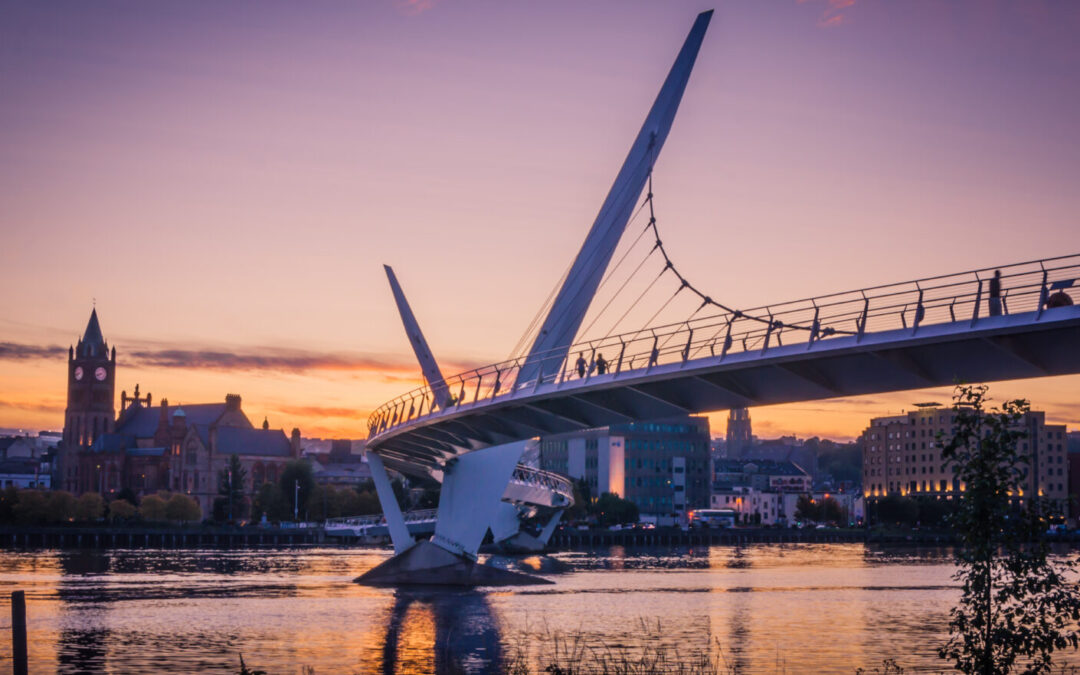 Winding walls, compact character, fabulous food and lots of history. Named as ‘One of the Top Ten Cities in the World to visit in 2013’ by the Lonely Planet’s ‘Best in Travel Guide 2013’, Derry-Londonderry, is a city pulsing with life and resonant with centuries of heritage. The city is compact and easy to explore. There are great walking opportunities along the almost fully intact 400 year-old walls.

Derry has  a history of conflict and while it will always remain a strong part of its identity, there is much more to learn about this beautiful walled city.

Things to do in Derry:

Derry is the only city in Ireland that can claim the accolade of being Ireland’s only remaining completely walled city. Originally built in 1614 and finished in 1618 the city is celebrating 400 years since the completion of these historic walls.

The walls form a historic walkway of 1.5km around the city and offer the most breathtaking views over the surrounding area. This walkway provides a unique promenade to view the original layout of the city which still retains its Renaissance Style-street plan to this day. Original canons that took part in two 17th century sieges can also be found dotted along the way. Along the walls are also the four original gates of the city — Bishop’s Gate, Shipquay Gate, Ferryquay Gate and Butcher Gate. Three additional gates, Castle Gate, New Gate and Magazine Gate. were added in the 1800’s.

The Guildhall is one of Derry’s most recognisable landmarks. Overlooking the River Foyle, it now houses the Mayor’s parlour and the Council Chambers. It is an impressive building both inside and out with beautiful stained windows and large doorways. It is open daily with free entry and a permanent exhibition on the Plantation of Ulster can be found here.

The Museum of Free Derry opened in 2007 in order to tell the story of what happened in the city during the period 1968 – 1972, popularly known as ‘Free Derry’, and including the civil rights era, Battle of the Bogside, Internment, Bloody Sunday and Operation Motorman.

The Museum of Free Derry exists to remember and understand the local history of the city and its contribution to the ground breaking civil rights struggle which erupted in Derry in the mid-1960s and culminated in the massacre on Bloody Sunday.
It puts the Free Derry period into a wider Irish and international context so that visitors see the events depicted not just in relation to the communal conflict in the North or the conflict between Britain and Ireland. They are invited to make comparisons with the civil rights movement in the USA as well as other massacres such as Wounded Knee, Sharpeville and Fallujah.

Opened in 2011 this 235 metre long, 4 metre wide curved footpath, track and cycleway stretches from the Guild Hall in the city centre of Derry City to Ebrington Square and St Columb’s Park on the far side of the River Foyle.

Reserve your Day tour or custom tour to Derry ▶